Apple or Samsung? Which Phone Meets Your Needs

Apple and Samsung are the biggest rivals in the cellphone industry, mainly because of the two products; iPhone from Apple and S Series from Samsung.

Both tech giants carry robust designs, epic cameras, streamlined graphics, and brand loyalty. With making up nearly two-thirds of the entire smartphone market globally, let’s look at which brand manages to emerge at the top in this article!

The flagship smartphones have the best display, with iPhone 13 getting a high-end 6.1-inch Super Retina XDR panel and Samsung S21 getting a 6.2-inch Dynamic AMOLED 2X display. 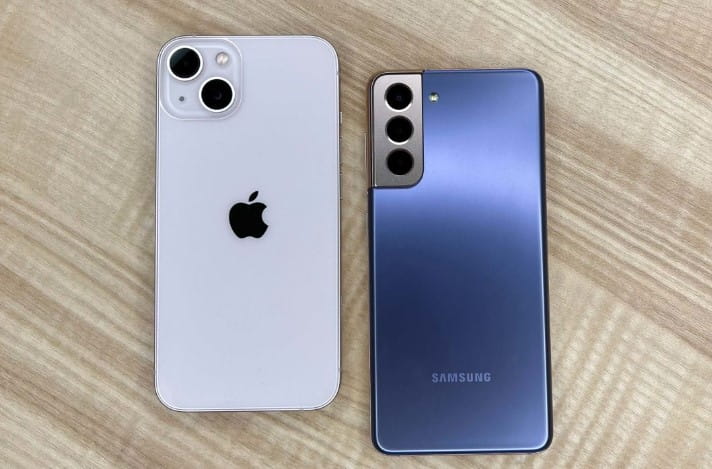 Due to a larger screen size and 120 Hz refresh rate, users love watching videos, playing games, and browsing on their S21, and iPhone 13 takes a dig due to its 60 Hz refresh rate, but you won’t feel much difference in the daily usage.

Both the phones showcased exceptional performance, with Snapdragon 888 on the Samsung S21, the fastest Android processor of 2021, and the iPhone 13 packing the famous A15 Bionic chip.

Both iconic smartphones stole the show with the ultimate looks and captured a wide range of audiences worldwide. Although the iPhone 13 Pro Max carried a similar look from last year with improved aesthetics, in comparison, S21 Ultra felt more rugged than before. 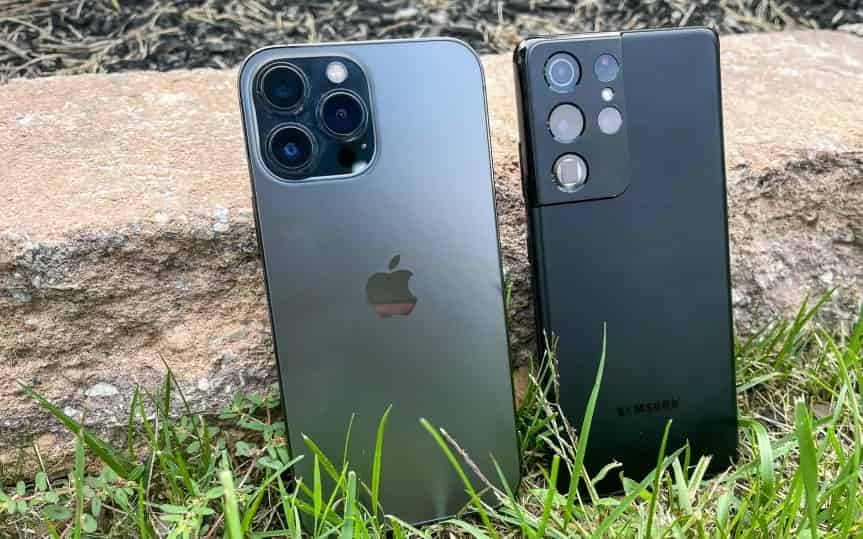 In the camera game, both the phones appeared neck to neck, with iPhone 13 Pro Max housing the lens in an obtrusive notch and S21 Ultra glorifying a punch-hole designed camera.

With a 120 Hz refresh rate in both handsets, the browsing experience feels more breezy and smooth. The iPhone 13 Pro Max's battery might be less on paper when compared to the S21 Ultra, but the optimization is outstanding and provides long-lasting performance.

iPhone 13 Pro Max not only gave a tough fight to Samsung S21 Ultra but is also placed right next to S22 Ultra, the new king in town, due to its features and demand. 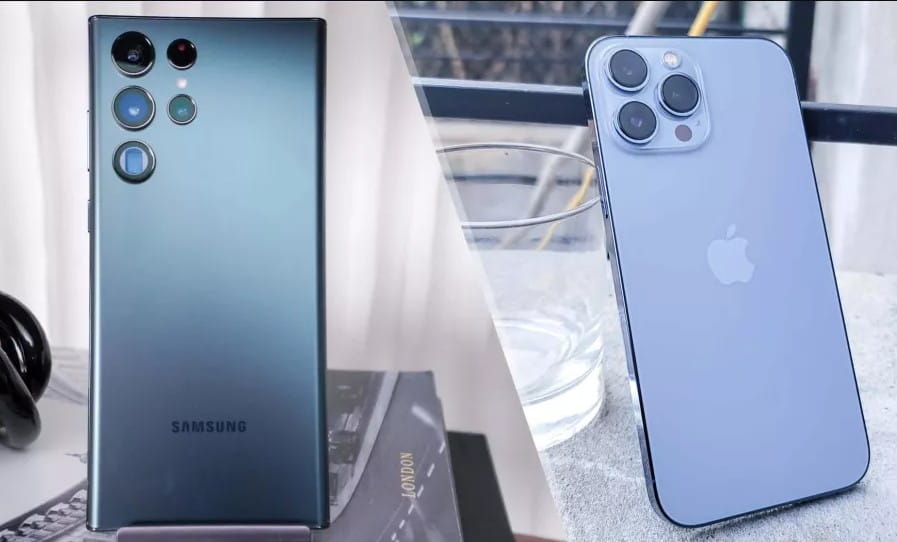 However, the S22 Ultra has terrific features like an integrated S Pen, a mindblowing 10x zoom, and 45W fast charging that shushed Apple.

But Apple fanboys have all the reasons to cheer because it naturally has some aces up its sleeve with an f/1.5 wide-angle and f/1.8 ultra-wide camera that captures beauty even in low light.

Apple lovers were ecstatic once again about the iPhone 14 Pro Max launch, which now came with an Always-On display but with its own twist! 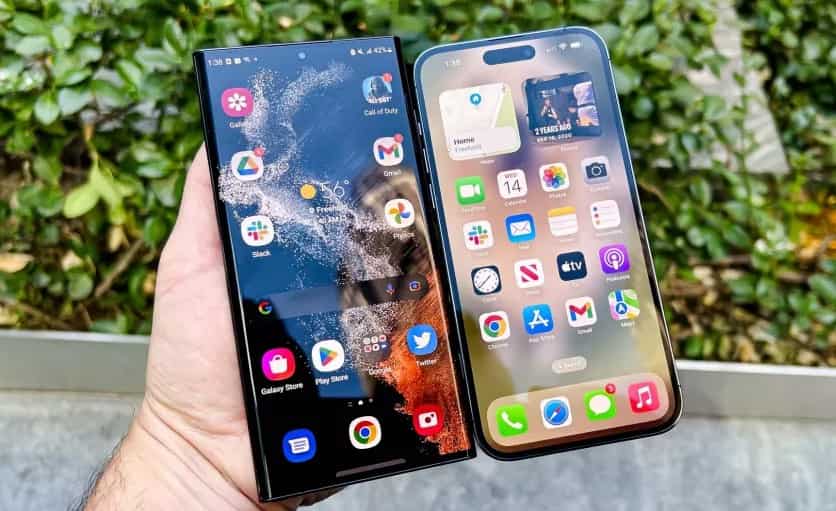 The S22 Ultra uses Gorilla Glass Victus+ on the front and back, and the iPhone 14 Pro Max features a Ceramic Shield coating on the front glass with added durability. But the curved display on the S22 Ultra makes it more prone to cracks than the flat one on the iPhone.

iPhone 14 Pro Max has also delivered delight for filmmaking enthusiasts with the ultimate 48MP camera for superb details. The Action Mode stabilizes the footage on your iPhone, creating no need for a physical camera stabilizer.

Overall, iPhone 14 Pro Max has surely upped the game in all departments, calling for some intense battle against Samsung’s upcoming flagship releases.

Although the Samsung flagship series smartphones were always one step ahead of the iPhone when it comes to screen quality, Apple, with its new tech, has narrowed the gap with its better screen resolution and Nit brightness.

However, Apple is still lagging in terms of screen refresh rate and sticking to 60Hz compared to the S22 120Hz.

The good news is both Samsung screens and iPhone screens are easier to fix when cracked and do not require buying a new phone for this issue.

Samsung S21 and S22 batteries are physically bigger than the iPhone 13 and 1 Pro Max, but the iPhone batteries perform a bit better than Samsungs.

On average, an S21 or S22 will last around 8 hours while using it constantly, while the iPhone can break the 10-hour mark easily.

If you start noticing symptoms of a dead battery on your Samsung or Apple phone, it is cheaper to simply replace the battery instead of swapping it with a new one and spending hundreds of dollars in the process.

Which Is the No.1 Phone in the World?

Undoubtedly, the iPhone and Samsung S Series have the crown of the most loved smartphones. Android users mostly prefer Samsung’s flagship, whereas iOS users close their eyes and pick the latest iPhone in the market.

The Bionic chip used as a processor in iPhones has a great reputation for being the best in the business. In comparison, Samsung’s S Series is known for personalizing the user experience. 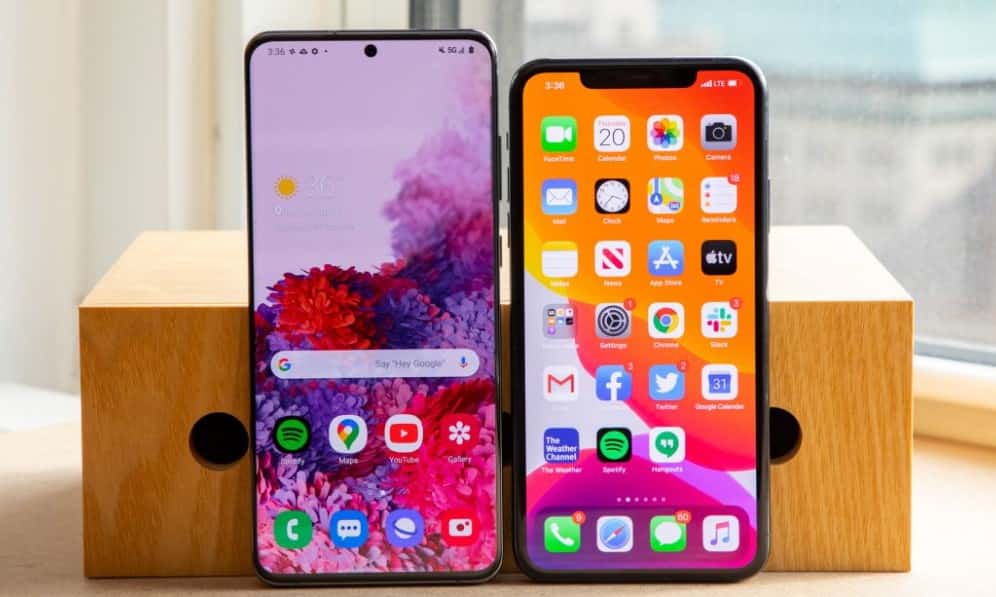 Why Do People Prefer iPhones?

People essentially prefer an iPhone due to its ecosystem that’s truly matchless. The operating system on the phone is so intuitive and appealing that users have no other choice. Here are a few noteworthy reasons why people go for iPhones:

Is It Worth Switching From Samsung to iPhone? 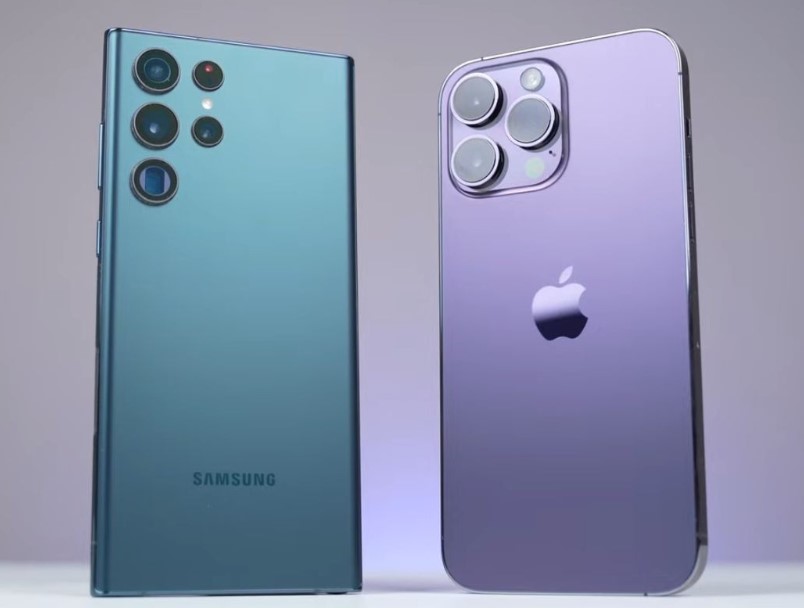 If you’ve been using Samsung for the majority of the time, you will find it difficult to switch to an Apple phone, but you’ll get the hang of it once you realize that the security features of an iPhone are incredible and hard to beat.

Moreover, the camera quality is exceptional and keeps improving with every hardware upgrade.

What Type of Person Uses the iPhone?

The people who mostly use an iPhone are highly professional and more educated with a healthy regime who are richer and business-oriented. iPhone users also love technology and are known to buy advanced tech gadgets for their daily use.

Also, consumers who want excessive privacy are known to choose iPhones as they trust Apple a lot.

Is It Worth Buying an Android or iOS?

Android and iOS have their own class with particular pros and cons that you should evaluate before buying. Both operating systems are designed while keeping the customer’s preferences in mind.

To make your decision, analyze your needs carefully.

In this article, we have discussed the insane competition between two smartphone manufacturers and mentioned the key differences between the iPhone and Samsung S Series models.

We’ve also discussed the factors people consider when buying an iPhone or a Samsung flagship.

Both tech companies keep improving every year with some solid new additions to their spec sheet to raise the bar, and now everyone’s waiting anxiously for the new release to compare them once again!